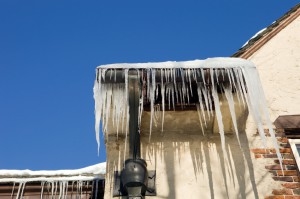 It is much easier and far less costly to stop ice dams before they begin. Snow removal is one of the best ways to keep ice dams from developing, but if an ice dam has already developed you may contact us to remove your ice dam before it gets worse. We typically use steamers to remove of ice dams because it will not damage the roof shingles. On average, we can remove about ten lineal feet of an ice dam per hour.

If ice dams are removed by steaming without removing the rest of the snow from the roof you could end up with a recurring ice dam problem. In addition to this, snow removal reduces stressful loads from your roof trusses and allows the attic vents to breathe properly.

How Do Ice Dams Form?

The snow on a roof surface that is above 32°F will melt. As water flows down the roof it reaches the portion of the roof that is below 32°F and freezes. Voila!—an ice dam. It is important to protect your roof and hire a St Paul Ice Dam Removal contractor with the experience that matters.

The dam grows as it is fed by the melting snow above it, but it will limit itself to the portions of the roof that are on the average below 32°F. So the water above backs up behind the ice dam and remains a liquid. This water finds cracks and openings in the exterior roof covering and flows into the attic space. From the attic it could flow into exterior walls or through the ceiling insulation and stain the ceiling finish.